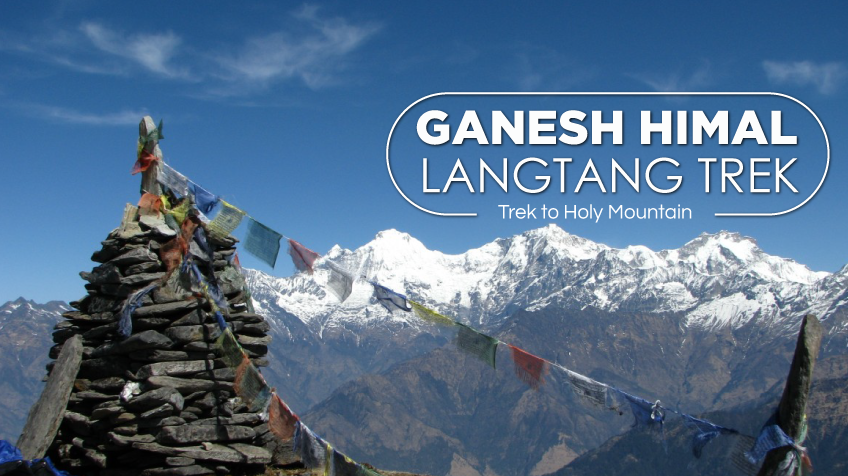 Ganesh Himal Langtang Trek takes you through one of the unexplored regions of Nepal. The trek is also known as Ganesh Himal Ruby Valley Trek. The trek is balanced with adequate fun and challenge, and so, it is meant for everyone.

Ganesh Himal is actually a range of mountains that is located in central Nepal. The major mountains in the range include Yangra, Salasungo, Ganesh II, and Pabil. The tallest peak among them is Yangra, whose height is 7422 m.

The name of the mountain massif is based on Ganesh, a Hindu Deity with a body of a human and the head of an elephant. The reason for it is that the south face of Mt. Pabil slightly resembles to that of an elephant. For many people, especially because of its resemblance to Ganesh, the mountain is holy, and is regarded highly by many devotees.

Ganesh Himal Langtang Trek route is a part of Langtang Region, so it covers numerous settlements and attractions of Langtang Valley and Langtang National Park. It’s a 10 days long trek, starting from Syabrubesi and ending at Montari Sky Camp. The trek is also famous by the name of Ruby Valley Trek, as the area where the trek happens is known for its Ruby mines.

Attractions of the Trek

Ganesh Himal Ruby Valley Trek offers numerous attractions and interesting things to do to the visitors trekking in the region.

The entire trek route is filled with viewpoints and spots from where you can have amazing sceneries of the valley, the mountains, the hills, the rivers, and other aspects of nature. You can simply stand and enjoy the views of mountains like Mt. Ganesh, Mt. Langtang, Mt. Manaslu, Mt. Annapurna, and so on. You can also peek at few of the peaks in Tibet, acting as a border and dividing the two countries.

Settlements on the Route

You make your way through the settlements of Somdang, Lapchet, Rigaon, Syabrubesi, and so on. All these villages are scenic, and filled with friendly locals. There aren’t many hotels and restaurants in the area, so trekkers tend to homestay in the houses of these locals. This doesn’t just let them experience the life of people in the region but also helps them know about their cultures.

During the trek, you’ll come across Parbati Kunda which is a pond, and an important pilgrimage site for the people following Hinduism. Thousands of people visit this place during the month of August, every year, and worship the deity Parbati. Similarly, the village of Tipling has two monasteries, a Catholic Church and a Protestant Church. You’ll notice the people, following the two religions, co-existing here, with peace and harmony.

Kumar Lama
Kumar Lama is a founder of Himalayan Exploration Treks Pvt. Ltd. He is leading a team of travel professional offering tailor made travel services across Nepal, Tibet and Bhutan.
Previous postThings You Should Know About Kanchenjunga Trek Before Climbing
Next postLangtang Tamang Heritage Trek – An Extraordinary Adventure