Trekking in Nepal is for all season, however depending on the trekking region and trail; more suitable seasons that help enjoy the mountain sceneries. The best time for trekking in Nepal is March to May in the spring and October to December in the autumn. The regions are such as upper Mustang, Lower and Upper Dolpo; it’s highly recommendable trekking during the monsoon season. The autumn and spring season are considering best trekking season. Some people prefer to trek during winter or summer due to busy trails in the autumn and spring. Himalayan Exploration Treks organize easy treks to strenuous that are led by our expert guides. We are making successful in delivering the trekkers to their destinations because we are designing the outline program according to their physical condition. The trekking holiday is organizing consequently.

We offer the variety of standard classic trekking holiday programs as well as dedicated trekking itineraries. We have designed trips with the study of the participants. If you are a beginner with no trekking experience or you are well-experienced trekkers looking for challenging and have something for you that meet your interests. Himalayan Exploration Treks carries out the sustainable and environment-friendly practices in our trekking operations that reinforce our success. We have always strived to keep our environmental footprint as small as possible and to give back to the many villages we pass through. Today, we still embrace this responsible travel approach when planning and operating trekking in Nepal. We invite you all for trekking in Nepal with the Himalayan trekking specialists, i.e., Nepal, Tibet, and Bhutan. 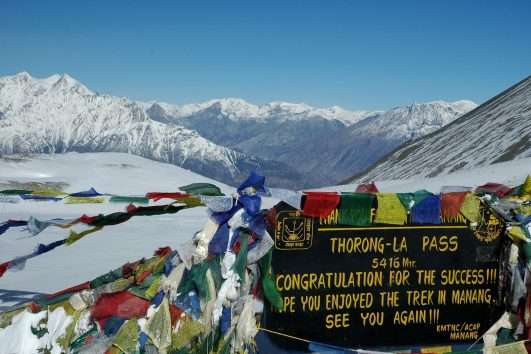 Annapurna is the first conservation area in Nepal. As many features make, Annapurna region is being a popular destination. It consists of several trekking itineraries either easy or demanding. The Annapurna Circuit Trek allows you for discovering from tropical to an aerial climatic area with challenging Thorong-La Pass. It is offering a fantastic view of the Himalayas and alpine meadows before entering the Kali Gandaki Valley. The grade is moderate to strenuous.

The Annapurna base camp trek is another popular destination in the Annapurna region. It passes through beautiful landscapes, forests, and villages. A short and easy Ghorepani Poon Hill Trek allow approaching to Annapurna massif and its neighborhood mountains. It’s mainly for a family holiday. It goes through the several Magar villages and their vibrant culture. Additionally, rhododendron forest and beautifully cultivated fields are rewarding.

The people dominate with a majority of ethnic groups such as Gurung, Magar, Thakali, and Manangba. The trekkers enjoy with their vibrant cultures and tradition. The Thakali, their habitat is upper Kali Gandaki valley surrounding the Jomsom. The Gurungs are spreadly distributing in the region especially on the hills and valley between Marsyandi River.

The wide range of geographical feature has lead to diverse flora and fauna. The area begins below 1000 meters considering as tropical so the landscape will be greenery. As gaining the altitude to cool and alpine climate, the natural plants change the tropical species. You will encounter different vegetation like rhododendron, oak, orchid, and pine. In the barren land of Himalayas, the tundra climatic are only stunted bushes and some medical shrubs. You will see the variety of wildlife such as mammals, birds, reptiles, and other species. 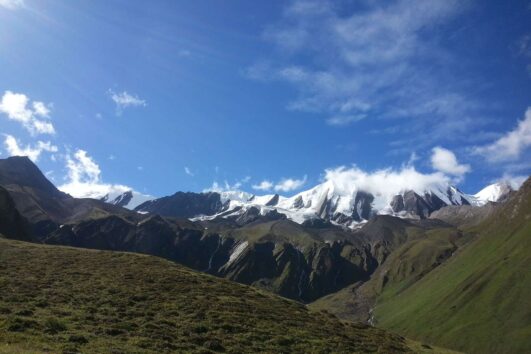 The Dolpo region lies on the Tibetan plateau and behind the Dhaulagiri massif. It continues to forbid until 1990, which includes assisted the traditions and ways of life to keep unchanged for many years. The Dolpo region has acquired great attention because of the 1st journey that has been arranged by the UK travel company in 1990. It divides into two parts – Lower and Upper Dolpo Trek. The trek associates the trekkers with the Tibetan plateau, jagged, and stark.

Dolpo is the awe-inspiring land featured with high passes and the Tibetan people. The hidden trail and its daring itineraries usually pass above 16,500 ft with the exquisite journey during the Upper Dolpo circuit. However, It encounters exciting areas, folks, villages, valleys, lake, and serene pines forests, oaks, as well as rhododendron. Dolpo region trek is one of the favorites and a different trek in Nepal. It is ideally suitable for both beginners and expert trekkers. 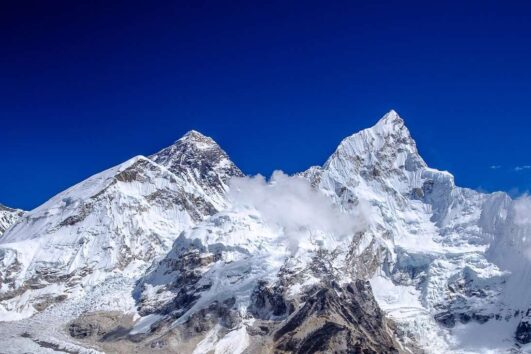 The name of the region exists from the world’s highest peak Mount Everest. The Mount Everest is known as “Sagarmatha” and “Chhomolungma” in Nepali and Tibetan language respectively. The features of the Everest region are scenery of the high Himalayas, and culture. Hence, it is the most popular for trekking on the earth. There are several trekking trails in this region base on the traveler’s physical condition and the duration.

The people of this region are a majority with indigenous people as Sherpa, Tamang, and Rai. The travelers will enjoy with a smile of Sherpa people, warm hospitality and their vibrant cultures along the trails. The Sherpa, they are a follower of the Buddhist faith since the trace of their ancient. There are a lot of Buddhist shrine and monasteries along the village and path.

Everest region declared as Sagarmatha National Park in 1976 with an area of 1148 sq. Kilometers. It comprises the harsh terrain and deep gorges. According to the altitude, the park dominates pine forests in the lower and silver, fir, rhododendron, and juniper cover the higher landscape. There is a rare variety of species that can find in the region.

The region is suitable for the family group with the purpose of viewing Everest, culture, alpine meadows, and its sister peaks. Also, experience the Sherpa village and their vibrant culture. Discover the Imja Tse valley while it touches the heart of Everest. Additionally, exploring the Sherpa people and culture with the Everest base camp trek. Likewise, Everest Three Pass Trek, which offers to discover the Sherpa culture, Gokyo lake, and crossing over 5,000 meters challenging passes and connects the entire Everest circuit. 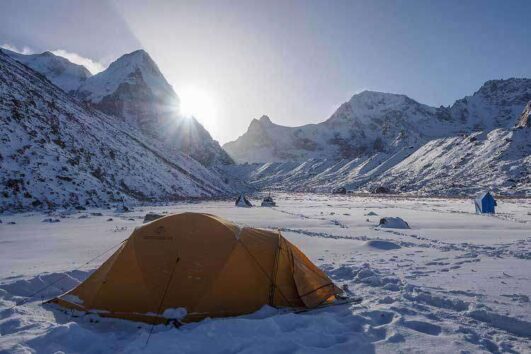 It could entirely accomplish as being a lodge trek in September-October. The fall off as well as in March-April-May. Kanchenjunga trek is superb with the fantastic and Nepal’s latest teahouse trek. It can rely upon as being an excellent program for Nepal. It is far off, outrageous and filled with adventure. But it is undoubtedly an adrenaline speeding trip within the Himalaya. Kanchenjunga base camp trek is undoubtedly an ideal objective for bushwalkers and hikers looking for the best further obstacle. 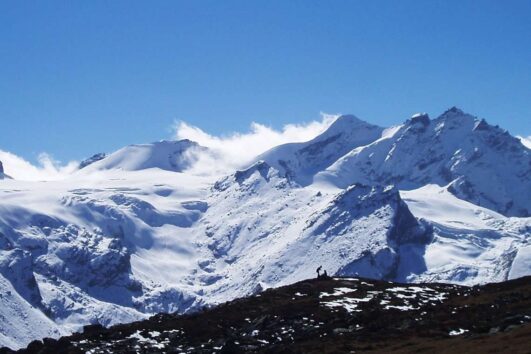 The Langtang region is a popular destination for trekking. Langtang region lies in the north of Kathmandu valley and closes to the Tibet border. Langtang is the first national park in the Himalayas. It a popular destination for trekking due to its unmatched geographical structure and bio-diversities. It consists of several itineraries according to the physical condition and the duration of the holiday. A trek uphill toward Kyanjing Gompa allows exploring the whole Langtang Valley. The people and their vibrant culture are another attraction, and it is easy to average grade.

Langtang region presents spectacular scenery of snow-capped mountains, vegetation, and wildlife. Moreover, the area is dominant by Tamang people, where an opportunity to explore the lifestyle and culture. Their culture, language, and settlements are unmatchable. The Tamang are Buddhist followers and believe in migrating from Tibet in ancient.

The Langtang region represents vital importance for travelers as the numerous high altitude lakes. Gosainkunda Lake is most famous for Hindus, and Buddhist pilgrimage among them. But it embraced in the full moon of August.

The Tamang Heritage trail allows for Exploring the Tamang culture since it passes through the beautiful landscape and villages. It allows discovering the ancient lifestyle of Tamang and their vibrant culture. Besides that, the taste of thrilling adventure gives us from the Ganja-La Pass Trek. A whole circuit makes extraordinary experiences, including Langtang Helambu Trek. It is an average to strenuous grade. 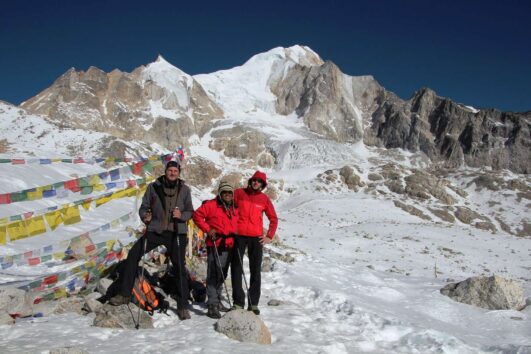 Manaslu is the 8th highest peak in the word. The Manaslu region is a wilderness trekking and opened since 1992 for group trekkers. Manaslu is а less touristic area although the Manaslu region has three significant valleys such as Tsum valley, Nupri Valley, and Katung valley. It represents the impressive mountain view, the variety of vegetation, constructive possession of different valleys. Moreover, unparalleled bio-diversities, primitive culture and maintain it’s fragile ecosystem are more attraction of the region. Manaslu Trek considering strenuous grade.

Discover the unspoiled region since it opened an exhilarating adventure. The best time for Manaslu Circuit is two different seasons, namely; Pre-monsoon or Spring (Mar-June) or Post-monsoon or Autumn (Sep-Nov). Manaslu circuit trek is a marvelous possibility to encompass planet’s 8th highest summits (Mt. Manaslu). Discover the rugged trails beside to breathtaking vistas of the Himalayas and cultural insights. 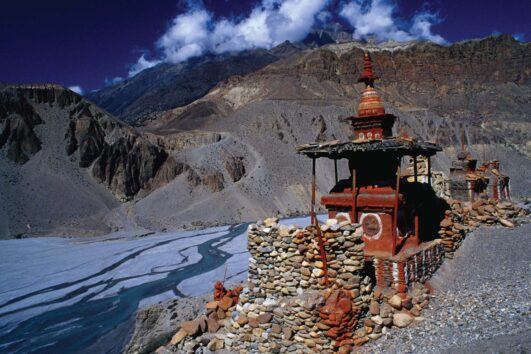 The Mustang Region is a hidden paradise in the Himalayas. The upper Mustang situates in the rain shadow area whereas less raining in the summer. The northern part of the Kagbeni is similar to Tibetan plateau, usually referring as Upper Mustang. Mustang was independent kingdom even though intimately attached to Tibet in the 14th century.

A trek into the Mustang region is through the barren landscape of the forbidden kingdom. However, the trek extends more wilderness camping experience to Damodar Saribung Traverse since it connects isolated Nar and Phu Valley. The barren landscape of the Tibetan plateau delivered up a fascinating mixture of primitive culture. Also, spiritual purity unmatches elsewhere in the Himalayas. Besides, Mustang is the fundamental nature of the Himalayan experience, extraordinary geographical arrangements in the universe. Mustang is still the world’s top destination for trekking. Upper Mustang Trek opened for group trekking since 1992.