Dhaulagiri Expedition is itself-one of the technical mountain among the 8000 meters peak. Mount Dhaulagiri stands at the height of 8167 meters. It amidst one of the most beautiful Kali Gandaki valley in the Annapurna circuit. This region is an enriching one with the beautiful sights to beholds — the deepest gorge in the world to visit and snow-capped mountains in full view all around. Mount Dhaulagiri expedition, the 7th highest peak in the globe, is a feat requiring good physique as we set up the climbing itinerary enough time to acclimatize while giving many routes to ascend. The alpinist takes the north-east ridge due to it’s safe but adventurous.

The Dhaulagiri expedition begins from Beni Bazaar. A short distance away from Pokhara marks the commencement of these beautiful treks. It takes trekkers through the villages with the folks living in perfect harmony enroute Dhaulagiri Circuit Trek. The constant, towering sights of the beautiful mountain since the trail passes through the charming settlements, forests, and yak pastures. Finally, reach the Dhaulagiri base camp at 4700 meters. From the Dhaulagiri Base Camp, the expedition activity begins here and requires to place up to four different campsites for facilitating proper acclimatization and expeditions process. The advance base camp at the height of 5300 meters, whereas camping at 5900 meters. The camp II at 6400 meters, even more, camp III and campsite IV at 7200 meters and 7500 meters, respectively.

The advance base camp is not only using for deposited gear but using for acclimatization also. But it is not to apply for overnight camping. It is high-risk of the fear of avalanches, but the camp 1st is safe for a campsite. The path onward is relatively complicated due to the steep icy trail. Camp 3rd lies west to camp two attain via further steep ice before ascending to camp IV. Both campsites are the most demanding climb more than others. The summit can reach directly, or generate another camp at 7900 meters for facilitating this climbing.  Once attaining the top, you will take in all the beauty encompassed by the Kali Gandaki valley. Hence, the climbers make it complete Dhaulagiri Circuit Trek together with Dhaulagiri Expedition in a single excursion.

Day 3: Briefing in Ministry of Tourism

To get the Expedition permits for Mount Dhaulagiri, It is required to attend Expedition leader whichever the Nepalese or foreigner for the briefing course conducted by Ministry of Tourism, Nepal.
4

We will have breakfast in the hotel, followed by transfer to the domestic terminal to get a flight to Pokhara. Then, pack off all the backpack and 3 hours drive to Beni road through the Annapurna Foothill. Then, 3 hours walk to Tatopani along the bank of Myagdi Khola.
5

The trail leads you Dharapani along the bank of Myagdi Khola. There might be disturbance the path in several places during the monsoon season due to landslides that leads several ups and downs. The trail goes passing by several settlements along the trail to Dharapani.
6

Today is a short day walk to Muri. The trail leads climb up above the River with magnificent views of Dhaulagiri, and a long descend to another stream named Ghatte Khola the climbs up to Muri for the night.
7

Initially starts trek descends with a bridge of Dhola Khola. Then, across it, the pretty trail downs through the cultivated land, rice fields and isolated villages and gradually, climb up to get the village of Naura which is larger settlements of Baghar.
8

Initially, the trail goes down up to Jyardan, this is the last village of the valley and another village we will meet until we arrive at Marpha. The trail goes gradually climbs up passing through the forest as we find some shepherd huts in some place. It called Kharka where cattle graze the grass. Finally, we arrive Bobang. It is also Kharka.
9

Once again, we enter to the forest area after crossing Konban Khola, climb to the top where we can see the west wall of Dhaulagiri I and descend to Myadgi Khola, cross it takes away to the east bank along the river to get a summer grazing camp, Bhaisikharka.
10

The trail leads forested area well known as Italian Base Camp with the rocky area, passing a steep slope and ascending to cross moraine of Glacier which falls from Dhaulagiri. Continue to walk along glacier encounter a spectacular grassy campsite called Japanese Camp.
11

Majestic views of Dhaulagiri hike around for proper acclimatization.
12

Today early start up the trek due to longer day walks in the mountain through the glacier. Finally, we reach Dhaulagiri Base Camp. From the Base Camp, I can See the majestic view of Dhaulagiri I, II, III and IV and an amazing view of Icefall inform of Campsite which falling from the pass between Dhaulagiri and Tukuche Peak.
13

Trek up to the Dhaulagiri Base Camp, it is wilderness mountain experience and taking a day off rest in the Dhaulagiri Base camp an adventure expedition begins from here. The team will set up the camp as per the requirement and its management. Having several days’ acclimatization and train the technical skill with climbing guides that makes mentally prepare for the summit.
40

After the successful ascension of Mount Dhaulagiri, the support team will clean up the Base camp and enjoy with the mountains, joyous moment that makes all the team happy.
41

Set out all the equipment and an early starts through the moraine someplace it should be fixed the rope to eventually the ridge that takes you easy angled snow sloped heading to the French Col with a height of 5360 meters then enter to Hidden Valley.
42

The trail leads us to climb the same elevation of French pass after climbing over the valley and need to be traverse another slightly lower Dhampus pass (5280 m) then steeply descend to Yak Kharka.
43

Early morning take a short and exciting domestic flight to Pokhara. Rest of the day at leisure and have a chance to explore lake and city
46

A long scenic drive takes 6-7 hours to Kathmandu from Pokhara. Crossing over the cultivated lands, local villages, en route along the Trisuli River arrive in Kathmandu at afternoon. Night at the hotel.
47

Its leisure day, rest and shopping in other hand security day in case of flight delay due to bad weather.
48

You will be transferred to the airport 3 hours before your scheduled flight to your home country.

Prices are quoted and payable only in (US$ dollars). All published prices are set as low as possible on our website. The prices may vary at any time due to currency fluctuation, fuel prices, and unforeseen economic circumstances. But, we guarantee our prices which already signed up for your tour. Please consult us for a custom quote. 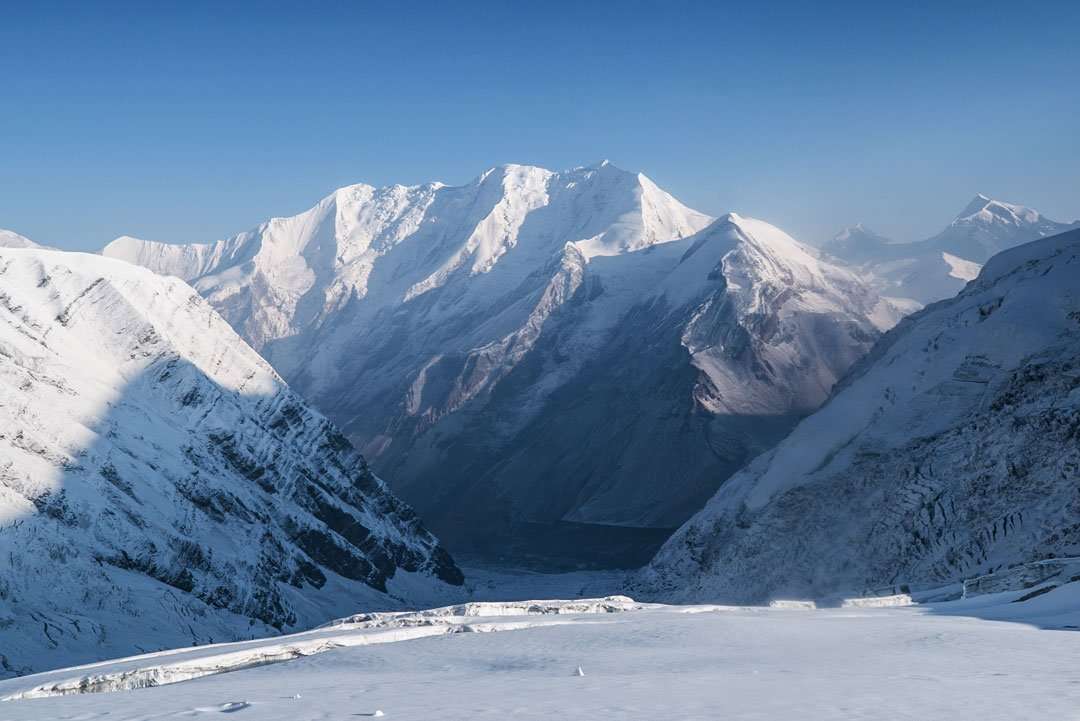 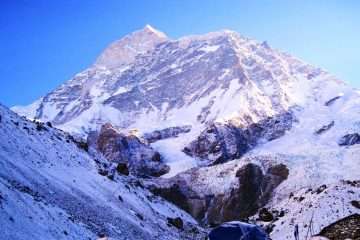 The Kanchenjunga South Base Camp trek is
15 days
Moderate 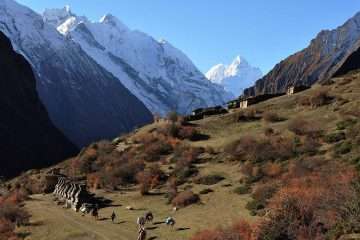 For many years Tsum valley has also
20 days
Moderate 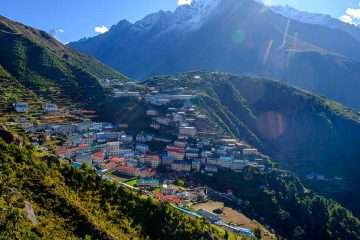 Everest Three Pass Trek is one of
23 days
Demanding
$23,250
One tour per person
Early Bird!