The Everest 3 Passes Trek provides an amalgamation of natural beauty and allows observing the lifestyle and mixing up with the warm and welcoming ethnic populations. However, it requires a good physique as well as proper acclimatization. Keep in mind; the Everest Three High Passes Trek is one of the most demanding tea-house treks in Nepal.

All the other treks in the Khumbu region since the Everest Three Passes Trek goes all the way starting from a flight to the beautiful Lukla. The trail then moves towards Namche Bazaar, the land of the Sherpa. It continues into Thame, Lungden, and finally reaches the Renjo Pass at an altitude of 5435 meters. The Renjo la Pass is a perfect viewpoint, whereas a 360-degree view of all the mountains in the Everest region. Another climbs up to Gokyo Ri to observe the spectacular views of the pristine snow-capped peaks. Also, visible the glaciers all around and the Gokyo valley in full view. The trail further extends to the Everest Base Camp via Gokyo Lakes, linking Gokyo valley and Everest Base Camp.

So, it accompanies by mind-boggling views of Everest as well as mountains like Ama Dablam, Pumori, Cholatse, and Khumbutse. Likewise, you will observe the peaks such as Khangtega, Lobuche east and west, and many more impressive peaks. The third Pass, Kongma – La, is at an altitude of 5535m comes next in the trail, which is an equally rewarding viewpoint. Hence, The Three Passes Trek ends in Namche Bazar, which can reach by being a further hike from Chhukung.

The Everest Three Passes trek is generally best to complete counter-clockwise. It’s also possible to go clockwise, but not recommended because of the rapid altitude gain while crossing the Renjo. Instead, you can add an extra day from Gokyo to explore the scenic Gokyo Lakes further up into the Gokyo Ri at the glacial valley. Here is the Everest Three Pass Trek map on google, which helps you navigate the trek’s daily schedule.

We are local specialists in Nepal, setting up a custom itinerary exclusive to your interests and time frame. Contact us to start organizing a custom tour.

Upon arrival at Kathmandu, you will greet and welcome by our agency’s representative in front of the Arrival gate with a Display board of Himalayan Exploration Treks then transfer to your Hotel.
2

During the free day in Kathmandu, you may have a chance to visit Kathmandu valley’s heritage site, followed by a pre-trip departure meeting regarding upcoming trekking peak climbing where you meet the trek guide and others team members. They will brief you about the team formation, equipment, and nature of peak climbing and other necessary information
3

You will be transferred to the airport in the early morning as per the flight schedule. 40-minute thrilling flights to an airstrip at Lukla by plane offers a marvelous view of Central and Eastern Himalayas and beautiful landscapes and hills. Lukla is a gateway to the Everest Region.
4

This is the second day of the journey. You will head to Namche after breakfast. The trail leads you to the northern valley of the Dudh Koshi River valley, passing by several beautiful villages with their vibrant culture, peaceful forests, and crossing over several bridges along the trail. Finally, you will get Namche.
5

This is an exploration day in Namche. Hike till Syangboche, a small airport in the region and consider as the world’s highest one. Then hike up to 3800 m to see Mt. Everest and other popular peaks. You will have proper acclimatization. In the afternoon, you may explore the village which is more equipped with modern amenities such as the internet, phone, massage and more.
6

We catch the North West trail from Namche. Many of the Mani walls and praying wheels encounter in the trail to Thame to explore the Sherpa culture.
7

The trail leads north from Thame to reach Marlung, where we should come across the several small Sherpa village and yak pastures.
8

The trail goes through the Yak pastures where no settlement and only encounter except some pastures. The lake is known as Rermo Pokhari, and the magnificent view of Rolwaling Himal and Nangpa- La Pass the trade trail between Tibet and Nepal for a specific period.
9

We walk toward Gokyo Lake by crossing the Renjo-La; the great day offers us magnificent views of Rolwaling Himal, Cho-Oyu, Nuptse, Lhotse, and the world’s highest peak, Mt. Everest and the beautiful lake and discovery of Gokyo valley downward.
10

Early morning, we climb up to Gokyo Ri, which provides us with proper acclimatization and breathtaking scenery of mountains, including Mt. Everest. It’s one of the lifetime achievements and memories around the top of the peak.
11

Today is more adventure day to make Cho-La pass at (5300m) begins pretty steeply to the first ridge and an easy walk up to another ridge. Then, trek short descend to get Base of Cho-la and steep climb up to pass; this part is hardest to walk if there is snow. We highly recommend using a crampon for this section. It is an easy downhill to Dzongla.
12

You are entering the east valley with easy downhill to get Labuche passing by pas pastures, beautiful mountains scenery, and glacier.
13

The trail leads plane trail but the feeling shortness of breathing due to altitude with spectaculars views of mountain surroundings. As we take a short break for lunch, then continue to walk to Everest Base Camp along the rocky and glacial trail.The trail continues the climb to Gorak Shep, check in to a lodge, lunch, and start your hike to EBC. Then return the same trail to Gorakshep.
14

Today is another climax of the trek; you will wake up in the early morning and climb up to Kalapathar (5545 m) to see the sunrise on the top of the world, Mt. Everest, and other Himalayan range. Then descend to the same trail to Lobuche.
15

Today is the 3rd greatest day to make the pass of Khongma-La (5535m). The trail continuously goes through the moraine of Khumbu glacier to Khongma-La Base Camp. There could be a difficulty because of the high altitude and daily walk in the glacier; ascending to the Khongma- La pass is the hardest day of the trek. Several mountains are approaching around the top of a pass. Then, they gradually descend toward Chhukung through the Imja Khola valley.
16

All the climax of the trek is finished while arrived in Chhukung. Afterward, just heading to low elevation, but it has its characteristics. Today is an easy walk to descend Pangboche village. The village is the situated lap of Mt. Ama Dablam and Tawache peak. The trail leads spread to several Mani walls, stupas, and praying wheels along the trail and a monastery in the village’s middle.
17

Easy walk up to Dibuche then climb up to Tengboche. There is the largest monastery in the Khumbu region, where many monks are meditation along the year from different parts of Nepal. The monastery is believed to construct in the 16th century.
18

The trail goes steeply descend up to the Punki Thana then climb back up to Sanasa, where the trail goes to Gokyo lake, Khumjung village, and Namche. Afterward, Namche’s easy walk, whereas encountered several stupas in front, and beautiful scenery of mountains are in the background.
19

The first part of the trail is a steep descent to Dudh Koshi and crosses the first suspension bridge. Then, easy walk up to Phakding by exiting the entry permit of Sagarmatha National Park in Manju.
20

An easy walk to Lukla arrived in Lukla. It is possible to visit the market then rest and leisure day.
21

Early morning, 40-minute thrilling flights to an airstrip at Lukla by plane offers a marvelous view of the Central Himalayas and beautiful landscape and hills.
22

The day can be occupied if the flight cannot be operating due to the bad weather.
23

Is the water at Everest Three Pass Trek safe to drink?

No, you are not allowed to drink water from the direct tap or streams on the Everest Three Pass Trek. But you can also use a purifier or SteriPen. It is expensive to buy water (maybe ten times the cost of purchasing water in Kathmandu). 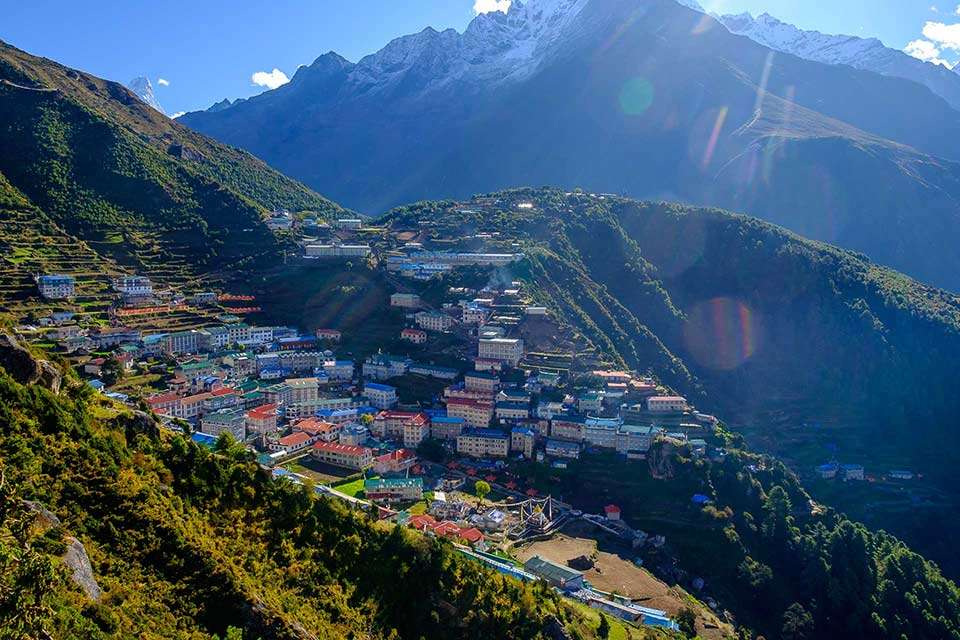 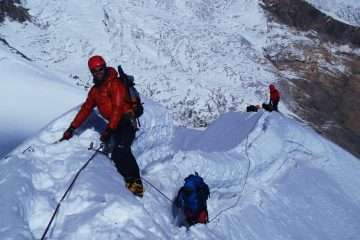 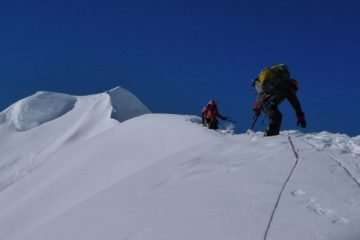 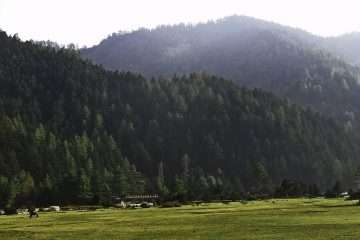